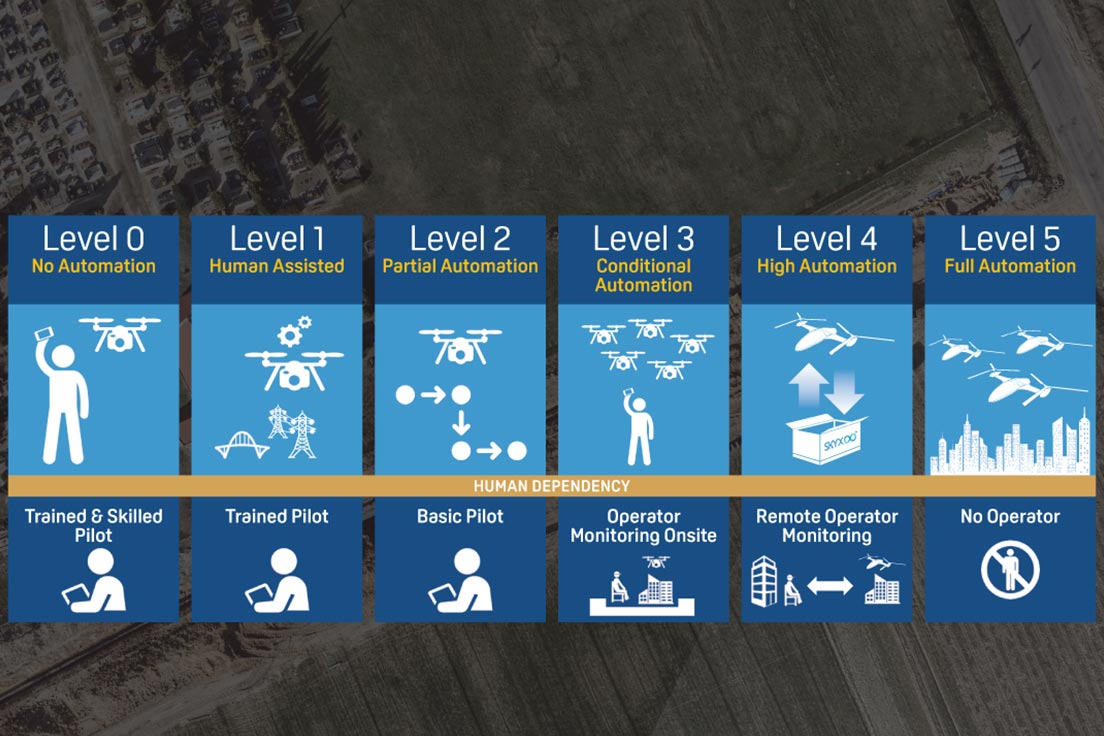 Drones, also known as Unmanned Aerial Vehicles (UAVs), stand to make another mass-positive impact on the way many organizations do business, but how?

The immediate value of UAV technology is to deliver revolutionary visual data, the likes of which you’ve never seen, that opens up a new perspective. Critically, you can leverage this data to visualize your assets and operations, deepening the insights you can obtain in tandem with your existing monitoring processes. Ultimately, you can empower your remote management teams to make intelligent and informed decisions.

The key to realizing this value? Autonomy.

Level 0 – No Automation
Human Dependency: Trained & Skilled Pilot
From take-off to landing, these UAVs require manual control by a pilot at all times. These vehicles are largely the domain of aviation enthusiasts and hobbyists. First Person View (FPV) drones are a great example, which are primarily used in recreational racing competitions or dynamic POV filming applications. In fact, we often obtain footage of our vehicles for promotional videos using FPV systems, filmed by members of our incredible talented team.

Level 1 – Controller Assisted
Human Dependency: Trained Pilot
This is the level of autonomy common to basic off-the-shelf aerial systems. Reducing the need for manual input, the vehicle will automatically stabilize itself so the operator can focus on getting into the perfect position. Other features may include rudimentary warnings to the operator regarding the approach of physical obstacles within a short distance. UAVs of this class are great for localized inspection and maintenance tasks, such as examination of an oil rig flare stack or a railway bridge. Beyond use cases of this nature, controller-assisted systems don’t offer any efficiencies or advantages in longer-range, routine inspection scenarios.

Level 2 – Partial Automation
Human Dependency: Basic Pilot
In this instance, the aircrafts onboard control systems will manage many of the core flight processes, but a human pilot is still primarily responsible for the safe operation of the vehicle. Basic flight operations are pre-programmed, such as altitude, speed, and general flight path – and certain systems are even able to handle take-off and landing themselves. However, the operator must still be present to monitor the flight, and take control in the event of any conflict in air space, weather, or emergency scenario. This level of automation reduces demand ON an operator but doesn’t reduce the demand FOR an operator.

Partially autonomous systems are ideal for surveys of small areas, such as a farm or oil wellhead facility, but again, the primary reliance on a human operator makes them less ideal for longer-range applications.

Level 3 – Conditional Automation
Human Dependency: Operator Monitoring Onsite
Very similar to Level 2, but the vehicle has a slightly greater awareness of its surroundings. Beyond traversal of a pre-programmed flight path, the UAV can also utilize on-board sensors to perform rudimentary detect and avoid measures for physical hazards in its path. Once the alarm triggers, the aerial system will stop or enter a holding pattern, at which point the operator is given full control of the UAV to correct course. Regardless, the operator must still remain onsite and within visual line of sight of the aircraft.

Why is this? Because performing manual evasive maneuvers requires a level of situational awareness and decision-making capability that isn’t feasible remotely.

At the end of the day, this slight increase in autonomy makes conditional automation systems only marginally better for the same small-scale survey operations discussed above.

Level 4 – High Automation
Human Dependency: Remote Operator Monitoring
A high-level of autonomy allows us to unlock the true value of UAVs in the monitoring of assets and operations on a massive geographical scale. With the right infrastructure in place, these aerial systems can live on-site to routinely inspect your assets without the need for a pilot that is physically present.

The key differentiator from earlier stages? The ability to detect and navigate around obstacles without the need for human intervention, based on a set of predetermined logic. For instance, during the inspection of a power transmission line, the UAV has greater awareness of its surroundings, and will not attempt a controlled avoidance maneuver until it is well clear of the infrastructure.

Remote operators function more like air traffic controllers rather than a traditional pilot, allowing them to monitor multiple systems at once. Highly autonomous aerial systems allow organizations to obtain valuable aerial data on assets over long-range, while simultaneously reducing demand on resources and personnel.

Level 5 – Full Automation
Human Dependency: No Operator
The peak to which all aerial data service providers are working toward: a UAV that can work independently to meet mission objectives, utilizing onboard AI for sophisticated decision-making. From it’s onboard systems, the vehicle will be able to perform dynamic flight path management, with internal processing that can direct the aircraft to alter its course in real time. Both technological and regulatory hurdles remain in pursuit of a fully-autonomous system, but we continue to make progress toward this goal with every passing day.

Getting High-Quality Aerial Data for Less With Automation

While manual, operator-dependent systems have their role to play in small-scale data-gathering scenarios, highly-autonomous systems are in the perfect position to help private and public organizations manage their large-scale assets and operations with visual data.

As an example of a highly autonomous workflow, the SkyX solution combines:

Not only does a solution like this gather fantastic visualization data, but it also streamlines much of the process around sourcing, analyzing, and refining data into something actionable. By automating and digitizing historically manual processes, we can alleviate the strain on human resources. Here are some examples of how this can play out in the real world:

To monitor a pipeline’s integrity and surrounding right-of-way, companies tend to use ground teams or fly-overs with a plane or helicopter. Both of these methods require the repeated mobilization of resources and personnel and yield subjective data at best. A drone-in-a-box system can live directly along the pipeline and fly inspections at a regular cadence, capturing the intel you need to address a variety of pipeline issues. That regular cadence is important because many pipelines are aging infrastructure that will suffer progressive issues over time. By flying regularly, we can establish a set of baseline data and use change detection amongst each new data set to identify leaks, corrosion, right-of-way issues, and third-party activity.

Monitoring operations of transmission play out similarly to an oil pipeline, and the UAV similarly offers enhanced efficiency in monitoring for right-of-way and third-party activity issues over traditional methods. However, the challenge posed by the transmission towers along a line highlights how a high-endurance autonomous system is preferable to a short-range, manual one. With a pilot-dependent system, the operator would have to physically travel to every tower along the line. With an autonomous system living along the right-of-way, we could: a) utilize a maneuverable, helicopter-style vehicle to perform multi-point inspections of towers, in addition to the routine right-of-way surveillance, or b) equip the vehicle with a Light Detection and Ranging (LiDAR) sensor that allows us to create accurate 3D models of the towers and power cables themselves.

Inspection of a rail-line is a great example of how removing on-site personnel can yield greater economic benefits to your operation. Human inspections along the track require the shutdown of revenue-generating traffic along the line, whereas a UAV can capture data to identify these problems without any disruption. Analyzing aerial photos to identify cracks, rail gauge, and integrity of various track components would be mind-numbing for a human being. With an AI algorithm performing the bulk of this analysis, as we use in our SkyVision portal, a human subject matter is only needed to perform final verification and disqualification of detected anomalies – yielding the most actionable data for delivery.

These are just a few examples of how a highly-autonomous workflow for aerial data can get you the insight you need to manage remote assets and infrastructure. You can stop wasting valuable resources and personnel on tedious efforts in the field that produce mediocre results. Instead, you can re-focus them on critical maintenance efforts, based on intelligent and informed decisions made from actionable visual data.