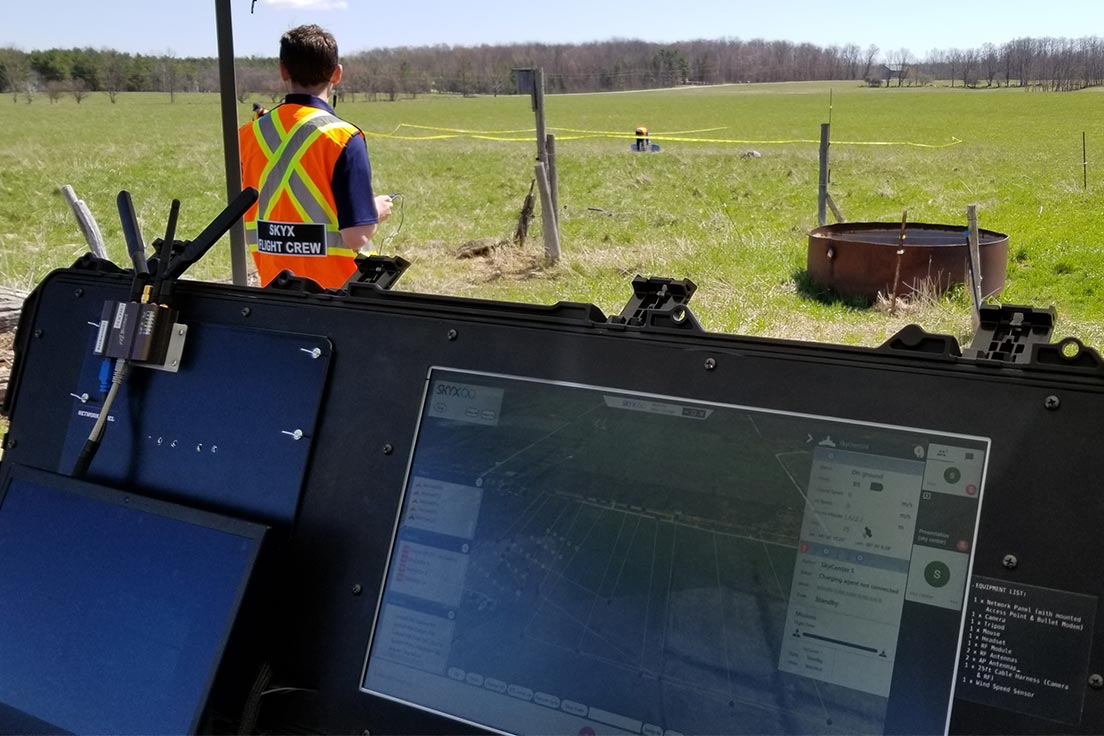 First ones in, last ones out. On the daily, first responders across the spectrum of emergency services find themselves at the intersection of rapid response and critical decision-making. Better data can drive better outcomes, and improving the tactical awareness that first responders operate with enables them to save lives and maintain safety.

Drones, otherwise known as Unmanned Aerial Vehicles (UAVs), are a technology that is redefining the data that emergency response teams are working with today. There’s a symbiosis at play here, as the world of emergency response is also where UAV technology itself is being pushed to new heights.

Use of small unmanned aircraft systems (sUAS) is governed by the Federal Aviation Administration (FAA). Generally, aerial systems are required to fly under 400 feet, within visual line of sight of the pilot, away from people, and only during daylight hours. Operators who want to fly outside these requirements require a waiver from the FAA. Due to the complex and non-standard nature of first response operations, these organizations comprise nearly 20% of all waivers that have been granted thus far – primarily for nighttime operations and flights over people.1 In other words, the field of emergency response is maximizing the value of UAV technology in the pursuit of saving lives.

Here are the reasons why UAVs are making such a large impact on the world of emergency response today:

The value of an aerial system extends beyond an active emergency scenario. In the aftermath of a large-scale natural disaster – such as an earthquake or hurricane – this technology can help organize remediation efforts and even expedite insurance assessments.

For example, in the wake of a hurricane, the infrastructure of a region can be severely compromised as flooding and debris from high winds make roads untraversable. Floodwaters are dangerous to staff and are made all the worse by hazards such as downed power lines, physical debris, or water contaminants. From a safe location, an operator can launch a drone that will perform a wide-ranging grid survey of the area. Once the flight is complete, imagery can be quickly downloaded and processed to create the high-detail data outputs you need, such as orthomosaic maps or 3D models.

These valuable data outputs can be leveraged in a variety of ways:

Creating 3D models of cities before a large-scale incident occurs can make it much easier to identify damage after the fact. Through change detection analysis of 3D city models taken before and after the event in question, you can quickly gain an understanding of the severity of damage that buildings and infrastructure have sustained.

2. Empower Your First Responders with the Right Knowledge

In a variety of high-risk scenarios, a UAV can act as a forward scout to collect the visual intel your team needs to coordinate an effective response. With traditional manned inspections, be they on the ground or in the air, the data you receive can be highly-subjective such as a one-off photo or verbal account. Whether it’s a large-scale disaster or small-scale incident, a UAV can quickly perform a methodical survey of the area and deliver fantastic quality videos and imagery. Using these materials, you can hone-in on specific areas, objects, and persons of interest.

UAVs are deployment-flexible systems. Once an initial response team reaches the perimeter of an incident, the drone can quickly deploy from on-site. This allows for a more rapid initial response than a manned aircraft – like a helicopter – and eliminates the need to send people into the unknown.

3. Get Clearer Pictures and Videos Than with the Naked Eye

At its core, a UAV acts as a natural extension of an operator’s senses. But what good is an eye-in-the-sky if you’re not able to obtain the key insights you need to inform life-saving decision-making? Standard high-resolution imagery can provide an abundance of valuable intel in a variety of scenarios, but other types of visual data can greatly expedite an emergency response operation.

Today, thermal imaging sensors are proving essential for aerial data gathering. For instance, the ability to actively monitor the temperature of objects is helping firefighters to better coordinate their efforts. Using a UAV carrying a thermal sensor, firefighters can better learn about a fire and determine how to control it. As personnel battle the blaze, the UAV operator can monitor how successfully water is hitting and putting out the fire, as well as examine a building for hot spots where a fire may be burning unnoticed.

Search & Rescue is another area where thermal imaging can change the game. Take the case of someone lost in the woods, who will take a lot of time, labor, and manpower to locate. From the ground, dozens of people are sent out to walk in a grid path through difficult terrain with limited visibility. A helicopter or plane can cover more ground but may experience difficulty spotting someone during their flyovers. Meanwhile, a UAV can perform a methodical examination of a large forested area with a grid survey. With a thermal imaging sensor, the person will be much easier to spot in low light or areas where they may blend in with vegetation.

4. An Aerial Vantage Point to Coordinate Teams on the Ground

UAVs can do more than just gather videos and imagery, they can become an essential tool for coordinating your team. According to a recent study, that saw randomly selected teams of searchers try to find simulated victims in rocky fields and cliff edges, teams equipped with drones were able to find the victims nearly 15% faster on average.2

In many scenarios, a first response team needs to find a small target in a large area. Beyond coverage of large areas from the skies, advanced aerial systems can leverage target-and-inspect protocols to pinpoint targets of interest that your team needs to move in on. With a robust communications link, the aerial system can provide real-time updates to both the command centre and teams on the ground. With precise coordinates and images of the area or anomaly in question, teams can hone-in on the target with a clear understanding of what they’re looking for.

Imagine a wildfire scenario, where a firefighting team is working to halt a dangerous blaze. As the team battles the fire, the aerial system can monitor the temperature and spread of the fire, so that team leaders can rapidly decide where to position personnel.

A wildfire monitoring scenario is a great example of how your choice of vehicle plays an important role. When fighting a wildfire, teams are going to be working in areas that don’t have ideal take-off and landing sites. Using a dual-rotor or multi-rotor vehicle, you can operate without the need for wide-open spaces or supplementary equipment.

5. Get Aerial Insights Without Breaking Your Budget

The implementation of UAV technology can save emergency response departments a considerable amount of money. The multi-million-dollar cost to keep a manned helicopter in the air can be replaced by a UAV at a much lower cost. For small local governments that can’t afford the price tag of a helicopter, a UAV provides a way to get high-quality aerial data for their teams.

UAVs are a cost-effective way for response teams to work in a safer and smarter way. With an eye-in-the-sky feeding valuable intel back to teams on the ground, first responders can make decisions that save lives and execute them in a way that preserves team safety. Beyond the high-intensity of an active emergency scenario, a variety of agencies can leverage high-quality aerial data to help with recovery efforts in the wake of a large-scale disaster.