We’d barely wrapped up a post about the amazing accomplishments SkyX has achieved over the past year…when we chalked up yet another significant milestone.

This one took place on December 10, with four members of the SkyX team on Salt Spring Island – one of the Gulf Islands between the BC mainland and Vancouver Island. SkyX was there, along with other leading UAV companies, to partner with InDro Robotics.

InDro is one of four companies across Canada granted special permission to carry out Beyond Visual Line Of Sight (BVLOS) trial flights by Transport Canada. These demonstrations, which also include other technologies such as sense-and-avoid and parachute systems, are part of a graduated approach to demonstrate to regulatory authorities that Remotely Piloted Aircraft Systems (drones) can be safely flown in Canadian airspace autonomously and beyond the visual sight of the Pilot-in-Command.

InDro CEO Philip Reece specifically felt that SkyOne, given its Vertical Take-Off and Landing (VTOL) capabilities and long range, was an excellent choice for this demonstration.

“(This project)…led us to a complete market search of what was available out there…and SkyX was one of the main companies that kept popping up,” says Reece.

The BVLOS trials are very important to both Transport Canada and the UAS industry as a whole, since they will contribute toward developing protocols to ensure that manned and unmanned aircraft can safely share the skies. (There are currently limited exemptions for First Responders to fly BVLOS in emergencies, which were approved only after an incremental approach that spanned some two years.)

“Now that Transport Canada is now following a similar route that they did in First Response in commercial endeavours,” says Reece, “I think this is the first step along that route for us to be able to see how BVLOS really comes into action in the next few years in Canada.”

It was also an incredibly important flight for SkyX. Though we’ve flown over rugged, hot and dusty terrain in Mexico, as well as below -20C in Alberta, we’ve never flown an extended BVLOS flight over water. This flight would prove our capabilities in yet another unique flying environment.

The planned route? Heading out some 15 kilometres over the Strait of Georgia before turning around and returning for a landing. Transport Canada (which has watched SkyX fly at its flight location near Toronto) was on scene to watch all of the trial flights, which also included technology demonstrations from other partner companies. 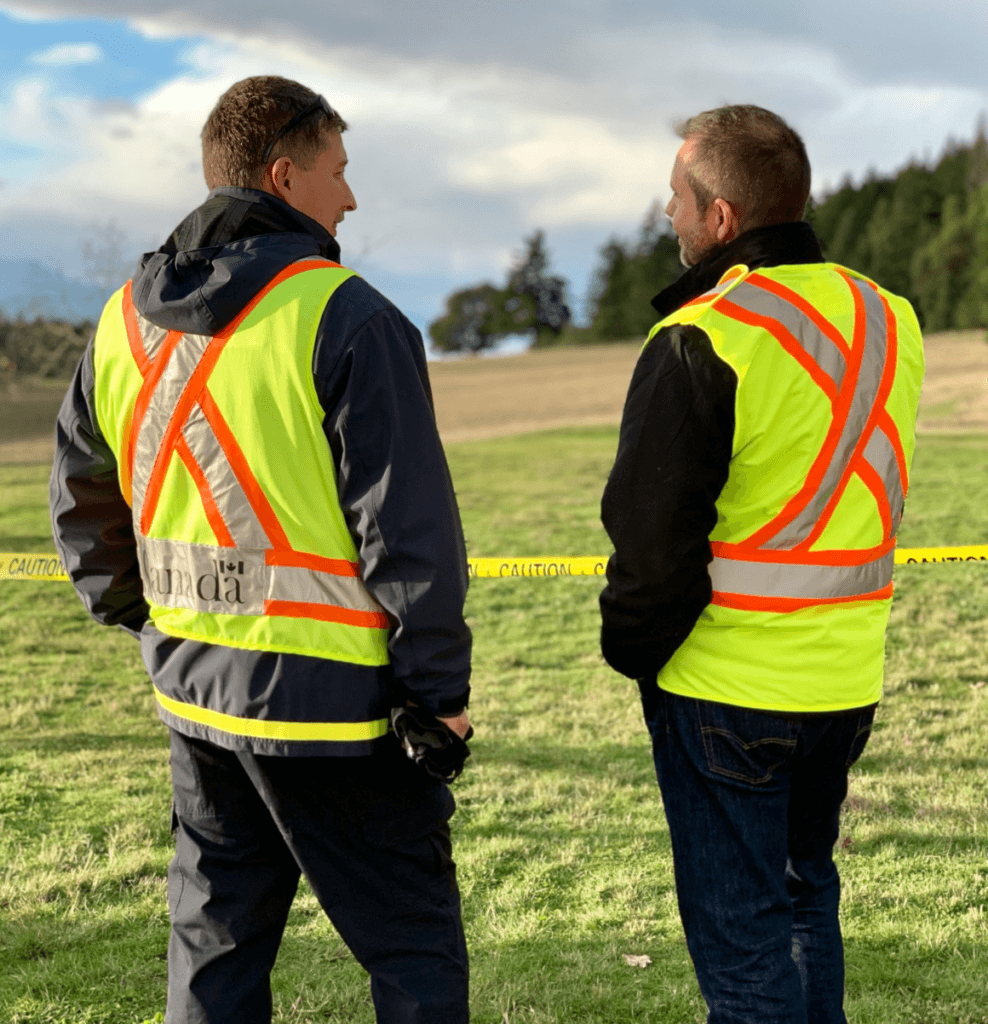 In terms of SkyX, we had a couple of missions to carry out. In the first, Pilot-in-Command Fiona Chui (a mechatronics engineer with a lot of flying time under her belt) carried out two VLOS flights on Salt Spring, within a strict geofence. These were still autonomous, and used our remote gear for programming and monitoring the flights (that’s the box you see on the table). Transport Canada officials watched as SkyX went through its Standard Operating Procedures and checklists, running the flights very much as a manned airline would. 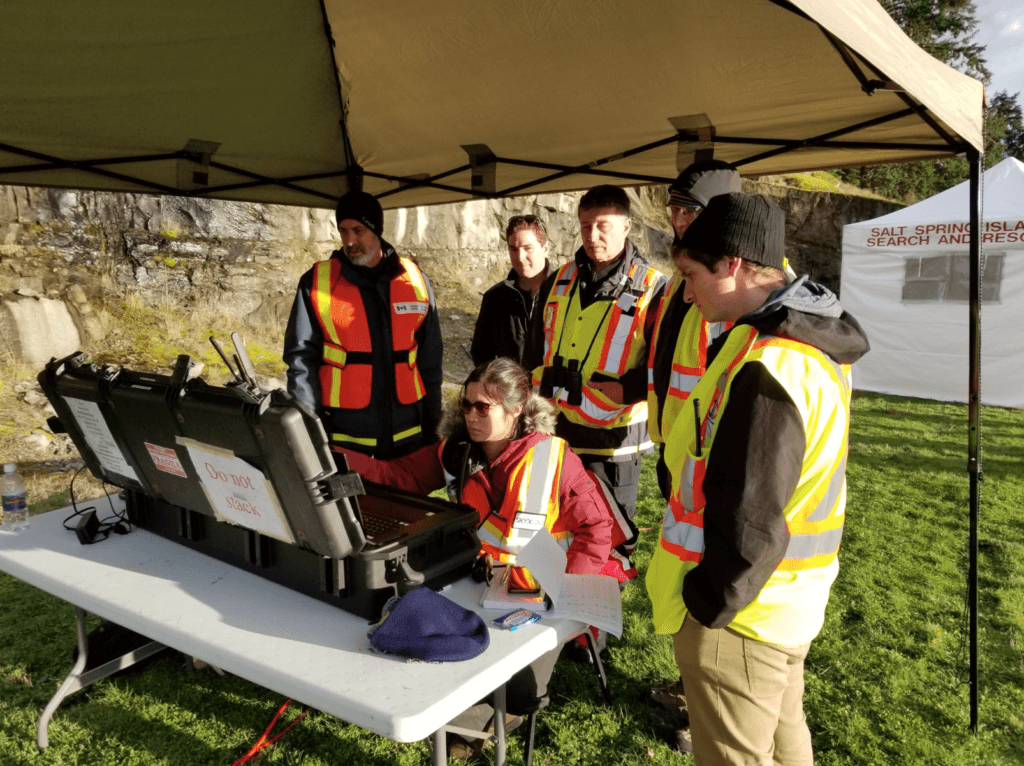 Later that same day, we had more ambitious plans: A flight some 15 kilometres out over the water and back. That autonomous flight would be initiated from our Toronto HQ – a very long way away. (SkyX engineer Eitan Rotbart was the Second-in-Command on the ground, ready to take over if needed.)

And the flight? It was planned as per the screen grab below: The inner blue line marks the route SkyOne would follow after transitioning from its vertical takeoff to forward, fixed-wing flight. And those outer rectangles? Those are geofences, electronic borders used to ensure that even if SkyOne were to somehow veer off its intended path, those invisible barriers would stop the aircraft from flying any further. Such safety measures are an integral part of how SkyX operates and will play an important role as BVLOS flights become more common, leading to eventual integration between manned and unmanned air traffic.

Take a good look at that picture. That’s a lot of water to cover.

BVLOS flight is our specialty, and what sets SkyX apart. Our Pilot-in-Command was sitting in our headquarters, some 3,300 kilometres away from the aircraft. After the autonomous flight was launched, the SkyX team would be monitoring from both locations as SkyOne took off and headed out over the water.

We’ve done flights similar to this before, including our 102-kilometre flight in Mexico in November of 2017 – which was also initiated and monitored remotely. And while we have tremendous confidence in our system, it’s always a time of immense focus and concentration when these flights take place. Here, from headquarters, is Pilot-in-Command Tzuki Friedman (R). Behind him is SkyX CEO Didi Horn. 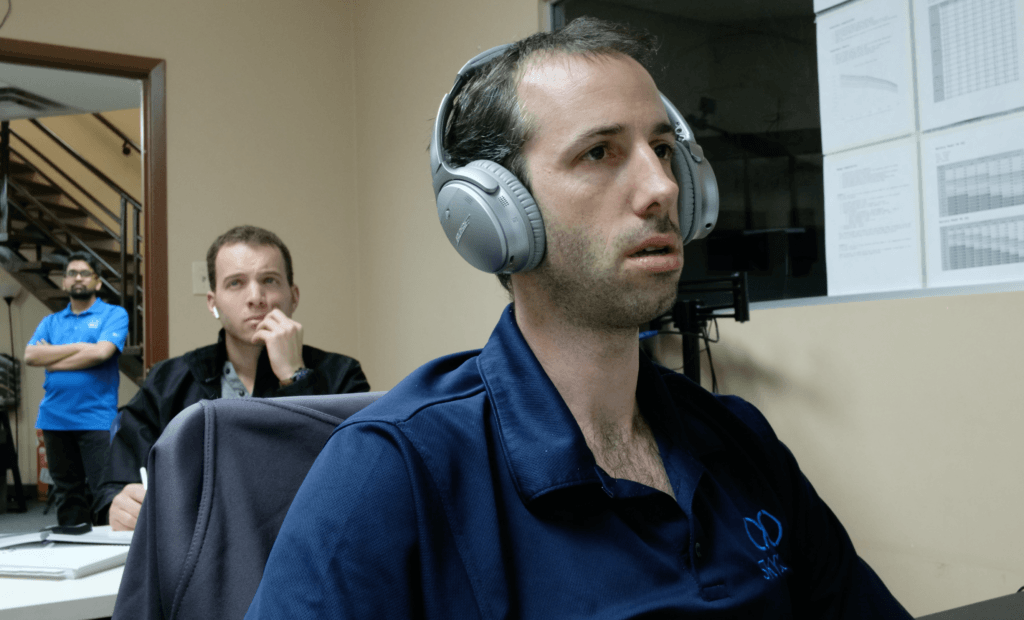 Everyone was watching. The team at HQ, the team on the ground, Transport Canada…and all of the other partners involved in these critical BVLOS Trials. Of course, our team could see electronically that the flight was working perfectly, but there’s nothing quite like spotting SkyOne in the distance, as it gets close to home.

And right on schedule, after a 30+ kilometre voyage (that included taking high-resolution imagery throughout), there it was – ready to transition back to multi-copter mode and land like a helicopter. Someone captured the moment SkyOne returned to earth with a cellphone. It may be a little fuzzy, but the importance of the moment was crystal-clear.

“I think it’s amazing,” said CEO Didi Horn. “It’s a huge accomplishment not just for us, but for the drone industry as a whole. The fact that SkyX was able to achieve this in such a short period, I think, is above and beyond.”

So that’s what happened on December 10, another significant date in SkyX’s growing list of milestones. In truth, there’s a little more to this story (all positive and very significant), that we hope to be sharing down the road. Let’s just say SkyOne performed above and beyond. 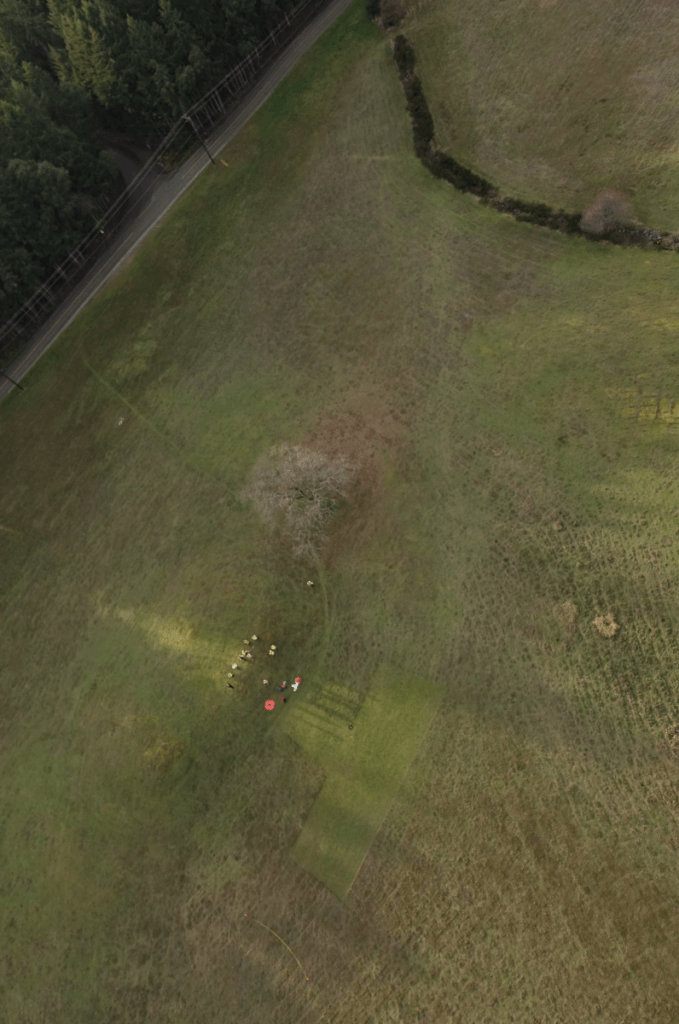 “Our UAV is built to fly long distances. Distances that most other companies just can’t even comprehend,” says Gav Martell, SkyX’s VP of Operations.

“Our team works with our system every day, and over time you start to take that for granted. The opportunity at Salt Spring Island to show Transport Canada, and other UAV companies a flawless 30km BVLOS flight, and to showcase just how great our people and our product is, was a chance to also remind ourselves just how special SkyX is.”