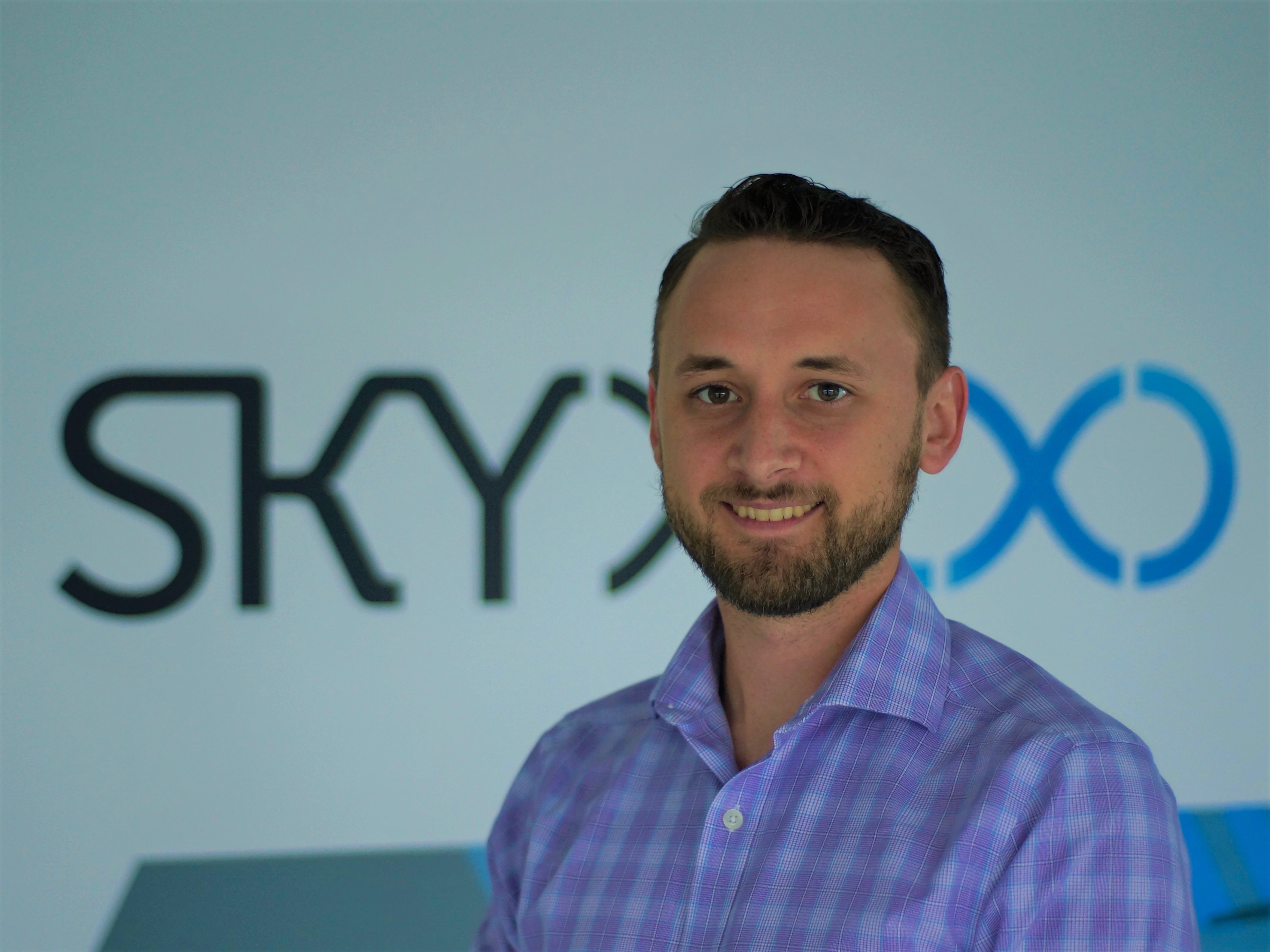 Niall McCallum Bio:
Living and breathing flight testing and deployment, I ensure that SkyX has robust aerial systems in place so customers can deploy their aerial monitoring solution with absolute confidence. Wherever SkyX is called, I navigate the logistics, regulations and overall government-compliance process to enable standards-based BVLOS operations for each of our international clients. In the past year, I’ve been digging deep into Transport Canada and FAA regulation to understand how we can better facilitate BVLOS operation within these North American frameworks.

Unmanned Systems Canada recently held its UC2019 Conference in our nation’s capital – Ottawa. SkyX was in attendance to share our experiences in attaining BVLOS approval in other parts of the world and to collaborate with Canadian companies and regulators to figure out how we can better facilitate the fantastic opportunities for BVLOS operations in Canada.

The True North Strong and Free: BVLOS in Canada

These famous words from our national anthem serve as a very literal summary of the existing permissions for Beyond Visual Line of Sight (BVLOS) flight in Canada.

In Canada, non-segregated BVLOS flights are only permissible in isolated areas and atypical airspace, generally encompassing the northmost regions of the country. If you look at a population distribution map of Canada, the inverse of this map is a very accurate representation of where you can operate beyond line of sight. The primary issue of this restriction is that there aren’t many feasible or worthwhile BVLOS opportunities for small to midsize operators in this space. Historically, only Transport Canada’s Aircraft Services Directorate has been successful in conducting widespread BVLOS in these remote areas.

Aside from permissible areas of operation, companies that want to operate BVLOS must seek special permission in the form of a site-specific Special Flight Operations Certificate (SFOC). The requirements for an SFOC aren’t as clearly defined as they should be. Regulatory and private entities are in agreement on what the end-product of BVLOS operations in Canada should look like, but the fine details are still hazy:

The short of it? BVLOS operation in Canada is a tricky business. Lack of clarity around the crucial details have left manufacturers and businesses who are eager to contract their services in a state of flux.

Comparing BVLOS in Canada and the United States

I’m often asked: which country is doing a better job with BVLOS regulations? Canada or the United States? Like many issues facing drone operators on either side of the border, the answer isn’t always so clear cut.

The United States excels at generating large quantities of valuable research data and enabling key breakthroughs in BVLOS operations. The American government has created an effective division of labor, with the FAA driving regulation and third-party research organizations, such as ASSURE, driving the data collection. As a result, the United States puts out more useful research for the industry and can better facilitate the approval process for leading BVLOS operators.

However, American operators struggle with a Part 107 waiver approval process which is not clearly defined. BVLOS operations may be more active in the US, but there is scant public information on what the guidelines for approval are. Waivers are approved on a case-by-case basis with the FAA and the details for successful applications are kept a proprietary secret. The United States is getting to BVLOS first and has tons of data to work off of, but not everyone is being brought along for the ride.

Canada excels at making sure all BVLOS operators have a level playing field. Transport Canada has taken a “raise the tide for all ships” approach that is about creating a common process for all operators to follow. As mentioned earlier, some of the fine details still need ironing out, but the overall direction is straightforward and available to any operator.

Where Canada struggles, is with research and speed of approval process. Transport Canada is a small entity trying to act as both a regulator, and a driver of research initiatives, which is slowing progress in comparison to the American model. Transport Canada performed a number of BVLOS trials in the past two years, but the data and lessons learned from these trials remains unpublished. Finally, while the goal of creating a level playing field for BVLOS is noble, it’s a slow process that has left leading operators feeling held back.

Here are three trends from the conference that stand to make a positive impact on BVLOS operators in Canada:

1. Reframing the Narrative to Drones-for-Good
Operations that enhance public safety can be the first major use case for BVLOS operations in Canada. If you prove that drones can save lives or protect property, it will create a huge tonal shift in a conversation that revolves around the risk of drone operations. There were many great projects in this vein at UC 2019 including disaster assessment, wildlife preservation, and infrastructure inspection. For us at SkyX, our work isn’t about saving lives amid disaster, but the work we do greatly increases the safety of routine operations traditionally performed by manned aircraft and ground crews.

2. Remote Traffic Management (RTM) For Urban BVLOS
RTM is going to play a vital role in the development of BVLOS operations in urban environments. Applications such as urban air mobility, 5G connected drones, and drone delivery; these projects are going to rely hugely on the implementation of an automated traffic management system built specifically to accommodate drones. Functioning RTM infrastructure could have implications for operations in rural areas, the key areas of interest for pipeline/asset operators, but likely won’t be a demanding requirement for approval due to the low volume of aircraft traffic in rural airspace.

3. Detect-And-Avoid (DAA) Remains a Persistent Challenge
When flying line-of-sight, you can rely on human observers to identify aircraft and avoid conflict. When flying BVLOS, you need a new solution to safely avoid aircraft in the area of operation. What Transport Canada wants to see (and rightfully so) is a system in place which either:

A. Gives a BVLOS pilot a similar sense of situational awareness as a VLOS operation.
or
B. Can effectively avoid conflicting traffic without input from an operator.

If we want to have an effective DAA strategy, the systems need to be versatile enough for direct integration onboard the aircraft. These technologies are still in very early stages of implementation and many regulators aren’t entirely convinced these airborne DAAs will be reliable in all BVLOS operations. Testing with small quadcopters and the like have been performed, but we’re yet to see a system that meets the “well-clear” criteria for fixed-wing aircraft.

Pilots on a Pedestal = Double-Standard for Unmanned Aircraft

The conversation around DAA brings to light a flawed mode of thinking that holds manned aircraft as the highest pedigree of aviation.

Transport Canada has implemented a framework for knowledge requirements rooted in manned aviation, which can be problematic if we consider the increasing levels of remote autonomy (decreasing levels of remote piloting) in unmanned aircraft. We need to consider that future BVLOS pilots will have knowledge and skills which are more akin to air traffic controllers, rather than pilots.

The ability of a human pilot to take control and quickly remove the aircraft from danger is a concept which is not just impractical in many circumstances, but also assumes that a human operator can always make a situation safer. In Canada, there have been between 15 to 66 aviation-related fatalities per year over the last ten years and a significant percentage of them are attributable to human error. The only way to guarantee zero-risk in aviation is to stay on the ground, there is always an acceptable level of baseline risk when it comes to any aviation operation. Approval for flights over people remains an elusive target for Canadian RPAS operators, and especially Canadian RPAS manufacturers who are expected to meet civil aviation-grade standards, which have historically not guaranteed a perfect safety record.

BVLOS operations are happening in many other parts of the world and creating high-impact results for industries and public agencies. Canada has a rich history of leading aviation innovation and we cannot afford to lose our place on the world stage.

SkyX is the premier provider of aerial data globally. By integrating Artificial Intelligence (AI) with purpose-built aerial systems, we deliver actionable data to drive operational excellence for midstream oil and gas, power transmission lines, railway lines and other long-range assets. Equipped with this intelligence, organizations can make intelligent and informed decisions with regards to the health of their aging infrastructure, mitigate risks associated with having remote assets and reduce a tremendous amount of cost for maintenance and insurance.

Looking to implement a turnkey solution? Contact us today for a demo.