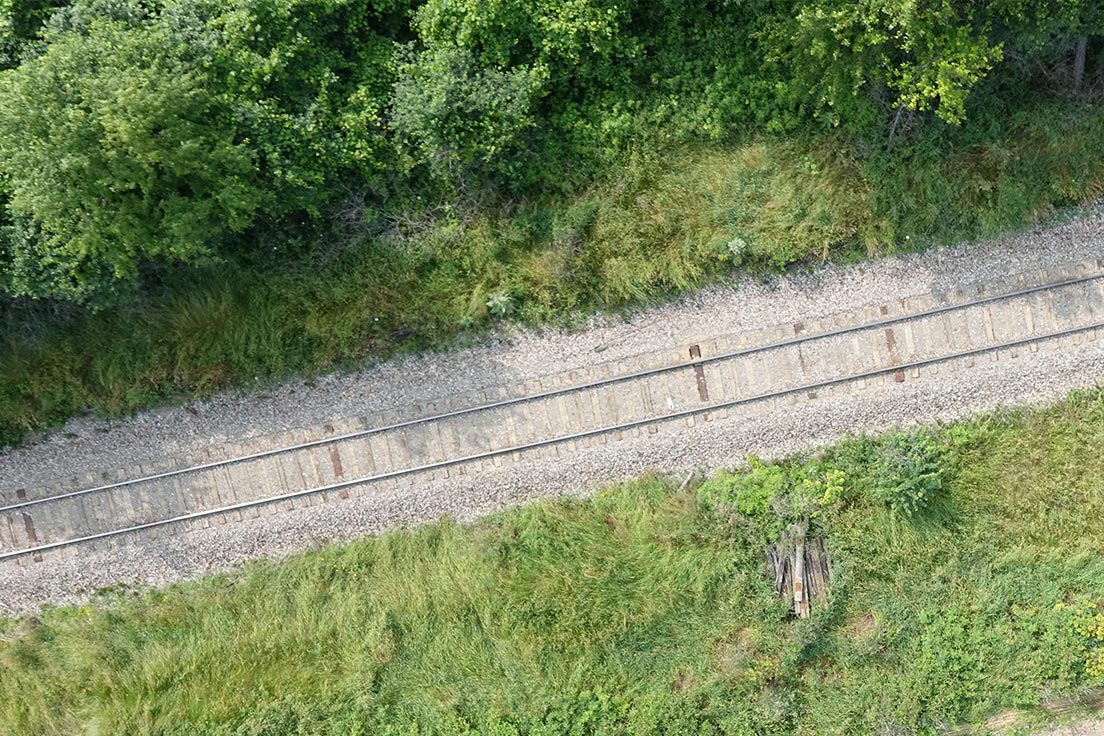 Throughout history, many people have made a big fuss about how hard it is to make the trains run on time. If you ask us, the people who maintain all the rails the trains run on deserve some of that awe and admiration.

With the advent of new technologies for streamlining visual inspection – such as computer vision models (we call ours SkyVision) and drones (affectionately known as SkyOne and SkyTwo) – railway companies have an opportunity to greatly improve the data they use to inform track maintenance, improve the safety and cost-efficiency of inspection operations, and get in front of developing issues on their rail line.

Because these new technologies, when deployed in the right fashion, provide the data building blocks for predictive analytics.

The greatest threat arising from track defects is derailment, and it’s a prevalent issue. In 2019, in the United States alone, there were 1,185 derailments, a significant portion of which were due to track-related causes, such as when a train comes into contact with rails that are cracked, set at an over-widened rail gauge, or warped from high-temperatures. Train derailments involve huge economic costs, environmental damage, and in the worst of cases – harm or loss of human lives.

With the right predictive model, rail operators will be able to observe the gradual shift occurring in the track from inspection-to-inspection, and through analysis, predict when that rail is going to reach a critical level of deformity that will lead to a derailment. With this kind of information in hand, railway companies can start to anticipate problems developing on their lines and address them before an incident.

To power the predictive analytics that get you ahead of derailment-causing defects, you need high-quality visual data of your track. This data needs to be consistent from inspection-to-inspection and accumulating at a frequent rate for effective change detection and trend analysis.

For this reason, taking your visual inspections to the skies is a must. Not only are ground inspections difficult to perform at the necessary rate for an effective predictive analytics model, but collected data can be highly-subjective, particularly in a ground-walk scenario. The nadir view of an aerial inspection is the perfect angle for getting a clear picture of your track. With a high-resolution camera mounted to the aircraft, it’s easy to get the necessary detail to examine many key track components such as ties/sleepers, fasteners, track ballast, and the rails themselves.

AI Can Handle the Volumes of Data Generated During Aerial Inspection

To build a visual representation of your railway for analysis, the aircraft is going to capture a series of overlapping imagery during flight. Analyzing this sheer volume of imagery for anomalies on various track components, or highly-specific measurements like rail gauge, would be a mental burden of herculean proportions for a human being. For this reason, SkyX leverages computer vision models to parse through all this imagery and identify the actionable data points.

After the model identifies potential anomalies, a subject matter expert verifies their accuracy and importance and the railway company receives actionable data to follow up on.

Starting with the vehicle itself, UAVs can take many shapes and forms to meet specific data collection objectives. For a standard rail inspection, a long-range capable fixed-wing aircraft is ideal. With a high-endurance aerial system, you can potentially cover hundreds of kilometers within a single flight.

To expand the effective area of coverage to a near-infinite range, SkyX uses xStation installations from which the aerial system can autonomously take-off, land, and recharge. With strategically located xStations along your railway, a single aircraft can cover vast stretches of railway. Not to mention, creating a distributed network of multiple aircraft and stations can set you up for mission-on-demand levels of operational readiness.

Another interesting opportunity arises when we look at the capabilities of helicopter and quadcopter aircraft. While a fixed-wing model is great for covering long distances, copter-class systems possess the maneuverability to perform multi-angle inspections of railway structures such as tunnels and bridges.

Finally, outfitting a UAV with the right sensor payload can further advance your level of insight. For instance, when a segment of rail is subject to too much traffic, the temperature of the rail can become so great that it begins to warp. Left unaddressed, this warping can cause a derailment. Using an infrared sensor, we can monitor the temperature of the railway, flag any segments that are experiencing unsustainable levels of heat, and divert traffic accordingly.

Not only does an autonomous aerial solution provide higher-quality visual data on your railway, it also captures this data with less disruption to your day-to-day business:

By leveraging new technologies like UAVs and computer vision AI systems, railway companies can revolutionize the visual inspection process for higher-quality visual data and greater operational efficiency. Making this end-to-end process a routine part of monitoring operations allows railway companies to leverage this consistent, high-quality data for the development of predictive analytics that can identify emerging issues for preventative maintenance.